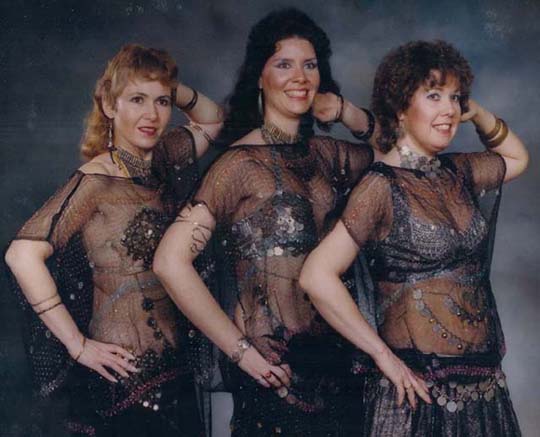 Jaleila saw her first Middle Eastern style dancers in several movies popular at the time when she was 11 or 12 years old. She loved the music and the mystique suggested by the dancers. When she saw “Scheherazade” her interest solidified.

Jaleila took her first classes through the YWCA in San Bruno, California in 1973 studying with Nakish, a very energetic and dramatic dancer. After arriving in Juneau in 1974 she was unable to find any classes until 1976 when Jaleila learned about classes being taught by Odette Foster and began studying with her.

Jaleila’s first workshop experience was with Jamila & Suhaila Salimpour at their week long event in San Francisco. While there she was able to meet the musicians of the Emerald Nights, and was also privileged to see the wonderful drummer Mary Ellen MacDonald, as well as Boston’s George Abdo and his orchestra perform live as part of the workshop.

Jaleila has also attended workshops in Seattle and Yakima, Washington (where she taught a cane/veil workshop) and she has danced and taken workshops at “Rakassah” in Richmond, California where she had the opportunity to study with many nationally and internationally known dancers.

As one the founding members of The Daughters of the New Moon Jaleila has loved the camaraderie and fun she’s experienced over the years. It’s been challenging, too! Katijya and Diana loved to change her position in a group routine right before we went on stage!  One benefit of performing Jaleila didn’t expect… once petrified of public speaking she can now do so with little or no nervousness!

Katiyja saw her first Middle Eastern style dancer at Zorba the Greek’s in Sacramento, CA and knew she had to learn this dance. She first began taking classing in 1976 through Juneau Community Schools with Dorie Swanson and later with Odette Foster. She expanded her studies to Jamila Suhaila Salimpour’s week long workshop in San Francisco where classes were also taught by Aida.

Later Katiyja studied with Badawia, Amir, Delilah, Dahlena, Bert Baladine, Beatta Zadow, Samisha, and Morocco, as well as many others and had the chance to meet the musicians of Emerald Nights as well as see George Abdo’s orchestra perform live. Katiyja took private lessons from Jodette in Sacramento, who turned out to be the instructor of that first dancer she had seen years before!

Katiyja has performed nationally and internationally: throughout Southeast Alaska, Seattle, Portland, Yakima, San Francisco, Boise, Whitehorse, the Caribbean, London. She has performed at Rakassah, at Fantasia, on cruise ships and the Alaska ferries, in gymnasiums, bowling alleys, private clubs and lodges, saloons, private homes, gardens, beaches, hotels, civic centers, and in the Office of the Governor of the State of Alaska!

Katiyja began teaching for Juneau Community Schools in 1981 with Diana Ground. In 1999 she added a small dance studio to her home where she continues to teach and the troupe meets to rehearse.  As CEO of The Daughters of the New Moon she encourages and assists troupe members in seeking a wide variety of instructors and says, “I encourage my dancers to recognize their own beauty and talent, make lasting friendships and expand their horizons through this dance.”

Still an active member of the troupe as choreographer and stage manager, Katiyja retired from publicly performing with the troupe in 2010.

Diana began her career as a belly dancer, teacher, and troupe co-leader when she was quite young. When Diana was about 7 or 8 she and her sister took a “Ballet-Tap-Acrobatics” class.  For the annual recital, the class did the Oriental Dance number from the Nutcracker Suite.  They had satin harem pants and vests, a little cap with a chiffon veil, and they even had cardboard finger cymbals painted silver.  They were probably as awful as any first year children’s dance class, but Diana loved her outfit and thought the whole event was wonderful.  Unfortunately, she and her sister couldn’t continue with ballet classes so Diana’s budding career was stalled for a time.  In junior high school she was involved in a teenage folk dance group and continued with it through high school.

When Diana moved to Juneau in 1972 there was no Juneau Folk Ensemble or any bellydancing.  Then, in the late 70’s, Community Schools offered a beginning bellydance class so she signed up.  After the first class, she went out, bought one of the two bellydance records in town, and purchased fabric for her first set of harem pants.  She was hooked!